Destructive and widespread fires are reported to have occurred across Gippsland in 1905 and 1906, with South Gippsland being hardest hit. Many lives, houses, livestock and properties were lost. At Mount Best, near Foster, 6 children from one family died of suffocation while fleeing their house, and at least another 7 died in Toora and Foster. 100-foot high flames were reported at Welshpool and Agnes. Mr Vale, a schoolteacher at Mount Best, saved his 28 students by evacuating them, placing them under wet blankets and rushing through the flames to get them water. Hundreds were left homeless between Foster and Welshpool. Newspapers across the country covered the terrible fires and the tragic loss of lives. A chance meeting of descendants of the Lonsdale and Vale families In 2005, led to a plaque being erected at Mount Best to commemorate 100th anniversary of the deaths of the Lonsdale children.

You will find a plaque attached to a rock right at the top of Mount Best, that tells the interesting but tragic history from the early 1900’s, of a devastating bushfire that claimed the lives of several of the local people including a number from just one family. It also remembers the bravery of several others and reminds us of the potential devastation that bush fires in Australia can produce.

The Adelaide Advertiser ran more of stories on the 27th January that described the devastation. Their headlines included “A Record of Heroism”, “Widespread Desolation” and “An Affecting Burial Scene”.

By the 30th January the papers were able to report what had happened to the Lonsdale children.

HOW THE LONSDALE CHILDREN DIED.

The same newspaper gives the story of the lucky escape of the Singleton family and notes the cause of the fires was settlers burning off scrub.

Thomas Singleton, of Toora, tells a thrilling story of a watchful night against the fire with his wife and three children and a baby in arms. He was some distance from home when he saw a fire, and he made as rapidly as possible in the direction of his dwelling, but the fire, rushing in with the fury of a tornado, was there before him. Mrs. Singleton, with her three children,

had seen her husband in the distance, and catching the baby in her arms, and with the other children following closely, she rushed from the burning home to meet him. When the husband and wife met, the woman was almost exhausted, and she fell into her husband’s arms. Singleton relieved her of the children, and “the wife gathering renewed strength, the whole family began to race for life, with the fire at their heels.

There was a haven of refuge, about three quarters of a mile away in the dwelling of Mr. Morphett, which, ‘ standing in a clear space was still safe from destruction. To this spot the fleeing family directed their steps. A patch of recently cleared scrub land in their way happily enabled then to get away from the flames, which for the time were quite abreast, and would otherwise have overtaken and overwhelmed them. 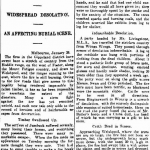