Large areas of state forest in Gippsland were burned in the 1932 fire and 9 people lost their lives.

TRAGEDY OF FATHER AND SON

(BY OUR SPECIAL REPORTERS)

Tragedy, resulting in nine deaths, arose from the bush fires which raged in many districts of Victoria yesterday. Six men were overtaken by flames while endeavouring to reach a river at Erica, and all perished.

Two Italians in the same locality escaped death but they were seriously injured. A father and son who had been fighting a fire near Warragul died as a result of being caught in flames. A man was suffocated at Black Sands, in the Powelltown district.

Overtaken in their desperate attempt to secure refuge from the flames in the water of the Thomson River, six men were burned to death by a fire which swept through thick timber and

scrub at Erica, near Walhalla, to-day. The men were racing from the timber mill of Messrs. O’Shea and Bennett, sawmillers. The Italians, employees of the firm, also left the mill, but, alarmed by the approach of the flames, they turned back after having run a short distance.

They were rescued from the mill this afternoon. Both were suffering severely from extensive burns on the head, body, and arms, and after having been treated by a doctor at Moe they were removed to the Warragul Hospital and admitted. Two other men succeeded in reaching the river and escaped. The victims were –

The fire which swept through the Erica and Fumina districts to-day resembled in many of its tragic features the disastrous fires which caused the loss of several lives and the destruction of much valuable property on February 14 1926. Only meagre reports had been received at Moe tonight, and the full extent of the damage is not known. Valuable plant and machinery

and a large quantity of valuable timber stacked ready for seasoning at the mill of Messrs O’Shea and Bennett have been destroyed. This is the third occasion upon which this firm has suffered loss in similar circumstances.

The fire has been burning in the hills for several days, and residents feared that a freshening wind might drive the flames through the thick timber to menace both Erica and Fumina. On Monday Mr J Yule, the district forest officer, assisted by three residents, burnt a large fire “break”on Mount Baw Baw. Unfortunately this “break” was ineffective when a strong

From early morning it was feared that little could be done to save the mill, and, fortunately, it was decided to send the women and children away from the houses near the mill to a place of safety. John O’Shea and his brother, Frank O’Shea, Vagge, who had ridden to the mill on his

pony, and seven employees remained behind to try to check the onward rush of the flames. They fought strenuously, but were beaten back by the intense heat. When the men realized that it was a hopeless task they decided to run to the Thompson River, a mile and a half away, to seek refuge in the water.

It was a race for life against the flames which were rapidly approaching the track which the men intended to follow. As they ran the flames appeared likely to cut off their retreat, and Cavassi and Richini turned back to the mill. ‘The others continued. Frank O’Shea and Mat Mitchell, an employee, were able to reach the Thompson River, but their companions were

After having destroyed the mill of  Messrs O’Shea and Bennett the fire swept on to Fullwood’s mill. The occupants of the houses there had removed furniture and personal belongings to a clearing, for they feared that nothing could save the settlement. Volunteers from Erica, however, assisted the millhands, after a strenuous fight, to save the mill and the surrounding houses. Travelling rapidly, the fire reached a settlement known as Amor’s,

and there, too, the fighters saved dwellings, furniture, stables and a quantity of timber

stacked ready for seasoning. By this time grave anxiety was felt for the safety of the Erica township. Fortunately, at half past 11 o’clock the wind changed to blow from the south-west, and rain began to fall. Several heavy showers early in the afternoon removed danger to the township, and by evening the fire was under control.

The fire also menaced the township of Fumina in the morning, and, despite the efforts of a strong force of fire fighters from Trafalgar, Moe, and Willowgrove and surrounding districts, the home of Mr J Fortune was destroyed. The homes of Mr Ferguson, Mr F Hillman, and Mr N Cronin were in danger, but they were saved.

A prospector had a fortunate escape when attempting to walk from his camp in the track of the fire to Ferguson. He was trapped between two fires, but after a desperate race he reached Ferguson in a state of collapse. Six other prospectors saved themselves by hiding in a tunnel near their camp.

At half past 7 o’clock this evening advice was received that searchers from Erica had found the bodies of John O’Shea, Vagge, Schultze, Richards, and Maloney.

FATHER AND SON DEAD. CAUGHT IN FLAMES. WHILE FIGHTING FIRE.

Caught in flames while fighting a grass fire this morning at the property of Mr T Brain on Greenshields road, near Warragul, a man and his son were so badly burned that they died

a few hours after having been admitted to hospital. A second man was seriously burned. The victims were –

The north wind this morning blew great rolls of cloud overhead, indicating heavy bush fires to the west, and there were several outbreaks around Warragul. The Warragul fire brigade summoned all available helpers, who were taken by motor to the places of the fires. At one stage there were probably 200 men engaged. An outbreak at Mr Brain’s property started about

6 o’clock this morning, and attempts made to extinguish it appeared to have been successful. While parties of men were fighting outbreaks in other parts of the property it was seen that the original fire had broken out again and efforts were concentrated on stemming its course. The strong wind prevented this, and the flames began to race over the dry grass toward the house. A large band of fire-fighters burnt a break and everything appeared to be safe, when

the wind suddenly changed and carried the flames in a westerly direction. The fire had a strong hold before anything could be done. The flames were travelling at 40 miles an hour and it was as much as the helpers could do to rush to a place of safety near the home. Cook, his son, and Bunting were fairly close together on a hillside. Exhausted by the heavy work he had been doing and the fumes of the smoke, Cook stumbled and the fire passed over him.

Bunting and the boy had been working in the direction of the house, where they arrived with severe burns and with their hair and eyebrows singed off. Seeing Cook lying on the ground the others rushed to give him help. He was carried to the house and Mr N McDonald, a line foreman, of the Postmaster-General’s department, emptied his truck of tools and took Cook to

the hospital, a distance of about three miles. Messrs M Kendall, Norman McDonald, and K. Lawson making the patient as comfortable is possible in the truck. A car conveyed Bunting and the boy to the hospital. Both George Cook and his son died in the hospital, and Bunting is in a critical condition.

Several large sheds some distance from Mr Brain’s house were saved, although the flames licked around the north corner of one barn. A pen of 15 pigs was caught by the flames and six of them were burnt to death. The others escaped. The fires spread over portions of the properties of Messrs McNamara, Waters, Johnson, R  Jones and Brooker, but the fighters kept the flames from the houses and haystacks.

Some people lost everything from fires in 1926 too 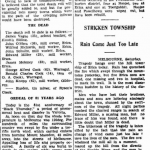