Lighthouse cut-off from surrounding communities due to a bushfire – all wooden buildings at the lightstation destroyed including radio shack and telephone line20.

The cause of the fire was unknown it was believed to have been caused by an escaped ‘billy fire’ left  unattended at Tin Pot Waterhole outside the northern boundary of the park. Over two weeks the fire burned through almost 75% of the park

When a grazier’s fire blackened 75 percent of the Prom in January 1951 – raging through 25 kilometres of the park from Vereker Range to the lighthouse in less than seven hours – fire was excluded from Wilsons Promontory for decades, with a policy to extinguish every fire. 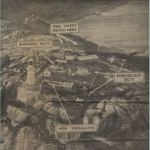