The 1965 Gippsland Bushfires are among the most extensive ever seen in Victoria. The Omeo fires started on the 17th February and the Briagolong to Bruthen fires started on the 21st February. The burnt until the 13th March and the official records show they burnt through 300,000 hectares (740,000 acres) of forest and 15,000 hectares (37,000 acres) of grassland, killing more than 4,000 stock and destroying more than 60 buildings.

While the fires were etched in the memories of those who experienced them, there are few official records, including maps, of the event.

In 2018 the fires were a key topic for a short film competition hosted by the community of Briagolong to raise awareness of fire danger. One of those videos has a number of people who directly experienced those fires telling their stories of the event.

55 years after the fires a community project to map the fires culminated in February 2020 at the Valencia Creek Hall. People shared their memories, stories and photos, a booklet by former forester and local historian, Peter McHugh, was launched and the fires were finally re-mapped for posterity. 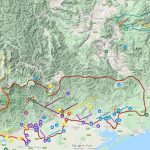