The Eastern Victoria Great Divide bushfires, also known as the Great Divide Complex, were a series of bushfires that commenced in the Victorian Alps in Australia on 1 December 2006 due to lightning strikes and continued for 69 days. They were the longest running bushfires in the state’s history. Between 1.2 and 1.3 million hectares were burnt, most of it public land.

The CFA reports that the Great Divide Complex of fires resulted in the following losses:

The Coopers Creek fire started in the morning of the 12th of December 2006 as a result of arson attack. It spread very quickly through the bush and resulted in the death of one person.

THE worst fears of country Victorians were realised last night as the Gippsland bushfires destroyed houses and a man believed to have been helping to fight the fires died.

There were unconfirmed reports of up to 12 houses lost in Toongabbie, north of Traralgon and the nearby town of Cowwarr.

“I’ve heard reports of up to about a dozen [houses lost] but I stress that’s unconfirmed,” said Chris Rose of the Department of Sustainability and Environment.

Nine properties are also said to have been lost south of Jamieson, including four at A1 Settlement and five at Gaffneys Creek.

The towns of Glengarry, Heyfield, Glenmaggie, Newry and Maffra West Upper were also under threat from a fire that had started yesterday at Coopers Creek, south-east of Erica.

Residents were stranded, with all roads blocked by the flames.

An ambulance spokesman said the man who died fell off the back of a trailer west of Heyfield and was run over by a following vehicle.

The Coopers Creek fire in Victoria, which is thought to have been deliberately lit, had burnt 7000 hectares.

A Toongabbie resident, Kate Smith, said she believed a neighbour’s property had been burnt, although her newly built home and property were spared.

“The paddock right next to us was unbelievable. It was just roaring and we were standing there, but we got nothing,” she said.

“It felt like a war zone, with all the choppers and sirens.”

Most of the larger fires in Victoria have merged into three blazes, including the main fire in the alpine region, the Tawonga Gap fire and the Green Hills fire. The Department of Sustainability and Environment believes some 420,000 hectares have been burnt.

(Note: Photographs from DELWP archive – unfortunately the names of photographers are not known) 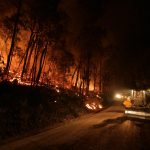