The Churchill fire started at about 13:32 on 7 February 2009, 3 kilometres south-east of the Churchill fire station. During the afternoon and early evening the fire travelled rapidly, affecting Jeeralang North, Balook, Le Roy, Koornalla, Callignee, Callignee North, Callignee South, Hazelwood South, Hazelwood North, Traralgon South, Devon, Yarram and Carrajung South. The Loy Yang power station, part of Victoria’s critical infrastructure, is about 25 kilometres
from Churchill and came under threat. Although the fire was at its most destructive on 7 February, it was not reported as controlled until 19 February. Eleven people died as a result of the fire, 145 houses were destroyed, and more than 25,861 hectares were burnt

Detailed study and interviews have been able to reconstruct the fire spread. This can be seen in the following video and two maps.

Churchill Fire Spread Map 1 (From DELWP yet to be published)

Churchill Fire Spread Map 2 (From DELWP yet to be published) 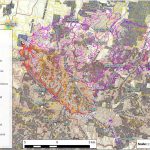