On 17 January, a fire ignited in bushland in the Donnelly Creek Rd. area, near Aberfeldy. As the fire spread to the east, 61 children and 15 adults were evacuated from the Licola Wilderness Village, while 10 residents and about 30 firefighters remained in Licola. Unusually for a fire in Australia, a significant spread occurred at night and by the following day the fire had covered 48,000 ha (120,000 acres), with spot fires starting to the south-east and impacting the communities of Coongulla, Glenmaggie, Heyfield, Newry and Seaton, causing destruction. On 18 January, it was announced the body of a man had been found in a burnt out vehicle in Seaton. The fire was the largest in the state since the Black Saturday fires of 2009 and required significant commitment from firefighting authorities to control; 760 firefighting personnel from the CFA and DSE in 180 firefighting appliances and 23 bulldozers, supported by 13 firefighting aircraft, attended to the blaze over its 43-day duration. The fire burned 87,000 ha (210,000 acres) of forest, scrub and grassland—much within the Baw Baw National Park—and impacted upon the communities of Coongulla, Dawson, Glenmaggie, Heyfield, Licola, Newry and Seaton; 21 houses, 17 vehicles, a number of sheds and caravans were destroyed.

The Aberfeldy bushfire burnt 87,000 hectares. At one stage it had a 200km front as it was moving towards the Avon Wilderness area. The fires spread out of control in the early hours of January 18 2013, destroyed 22 homes near Seaton, Dawson and Glenmaggie, killed around 180 head of livestock and took two months to be brought under control. They were found to have been started negligently by someone who was burning papers in his backyard.

The fires which resulted in the death of one man were found to have been negligently lit. 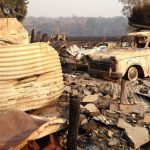