Much of the following material is from this report

On 9 February 2014 fires took hold in the Hazelwood mine as a result of embers spotting from bushfires. The mine fire burned for 45 days, sending smoke and ash over Morwell and surrounding areas for much of that time.

There were three major fires that were in the immediate surrounds of the Hazelwood mine on and leading up to 9 February 2014, when the mine fire took hold.

Those fires were named as the:

The above photograph was taken facing east from an aircraft hovering above the Princes Freeway at 1.27 pm on 9 February 2014. The Morwell township is in view in the top left-hand corner and the Hazelwood mine is in the top-middle of the photograph 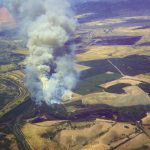