Fires that had been burning in East Gippsland when the Hazelwood Fire began have been forgotten by all but those who lived through them.

The Mt Ray – Boundary Track fire was started by lightning on 16 January and burnt for some 67 days over 6,700ha of public and private land. It blew up on February 9th 2014 destroying 3 homes, numerous sheds and outbuildings, 900 livestock, and 73 km fencing. No human life was lost.

A Community Report of the fire was finalised in July 2014.

The Goongerah-Deddick Trail Fires started as a series of small lightning strikes on 15 January 2014 that over 53 days burnt through 166,000ha threatening the communities of Goongerah, Bonang and Residents of Goongerah were urged to evacuate on 2 Feb

A Community Report of the fires was produced in July that year. 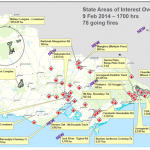