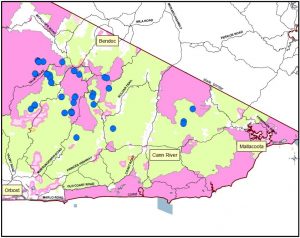 After the Large Brown Tree Frog’s call went unheard for 19 years between 1996 and 2015 in Eastern Victoria, the vulnerable species’ local survival now faces another hurdle following the destruction of nine artificial habitat structures in the 2019/2020 bushfires.

The Victorian Government’s Department of Environment, Land, Water and Planning (DELWP), in partnership with Moogji Aboriginal Council, is prioritising the replacement of the frog ponds, as well as introducing an additional 18 into known breeding sites across East Gippsland, under the Bushfire Biodiversity Response and Recovery Program.

“The Large Brown Tree Frog is an elusive species who has demonstrated their resilience to fire more than once,” he said.

“Researchers have the benefit of documented success and breeding sites for this species, which has mostly occurred over the past 5 years. We are building on this knowledge to fast track our response to supporting the Large Brown Tree Frog”.

In 2017, following the contemporary rediscovery of the species, a prototype was developed by DELWP’s Natural Environment Program mimicking the environment provided where the rediscovery occurred, known as ‘The Log’ – a large tree that was felled for road safety after wildfire in 2014. ‘The Log’, located near the road network, presented issues for long-term conservation of the species due to a high presence of sediment and human disturbance.

With the benefit of the knowledge gained in the pre-fire trials, a total of 27 frog ponds are in construction, thanks to Moogji Aboriginal Council, scheduled for installation within the next three months.

“It’s a slow and steady road for Large Brown Tree Frogs, however we are improving upon what we’ve learnt and providing support in what will be the largest effort to date for the species in Eastern Victoria,” Marc Perri said.

“Our researchers are passionate and skilled at identifying the unique call of the Large Brown Tree Frog, and we are waiting patiently for the day when we hear their beautiful croaky song in the wild again.”

Read more about frog species and the status of a variety of species following the 2019-2020 bushfire season here: https://www.frogsvic.org/newsletter