The immediate effects of fire for animals include death, injury and survival. Animals which survive the fire itself may later starve or be exposed to predators as a result of a lack of food and/or cover.

During a fire event, less mobile animals, such as many reptiles and some of the larger mammals, tend to take cover in burrows or tree hollows. Highly mobile animals (including birds, for example) may leave the fire area before or during a fire. To survive, in areas not affected by the fire, they need to outcompete other animals which have also retreated to unburnt areas, or return to the burnt area.

Fast moving, high intensity fires can cause high mortality. Intense fires burn into the tree crown and hollows and there may be few or no nearby refuge areas for animals. Intense heat can also penetrate underground.

Invertebrates such as insects and spiders are also mainly killed in high intensity fires, when bark and litter layers are destroyed. They may survive lower intensity fires in the litter and soil, or under bark. Flying insects have a higher chance of survival due to their mobility. They may move away and return after the fire. Invertebrates are an important food source after a fire, particularly for surviving birds and reptiles.

In the longer term, burnt areas are recolonized by animals as vegetation recovers. This process occurs more rapidly for more mobile species.

Various animal species respond differently to fire. Some species, such as the Flame Robin, are attracted to recently burnt areas and are absent in areas that have not been recently burnt.

If species responses are considered for more than a few years following the fire, it becomes evident that different species may benefit at different time points after disturbance.

A series of examples demonstrate the range of faunal responses to changes in the vegetation following fire. Flame Robins (Petroica phoenicea) come into recently burnt areas where they can find food. Once the vegetation has become established, Bronzewing Pigeons (Phaps calcoptera) come for the seeds. As the vegetation becomes more dense, Bush Rats (Rattus fuscipes) return to peak abundance. More sensitive species such as Dusky Antechinus (Antechinus swainsonii) take longer to return. 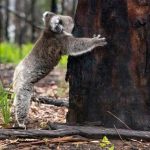 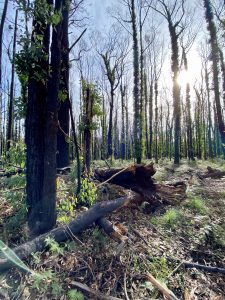 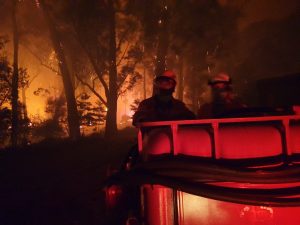 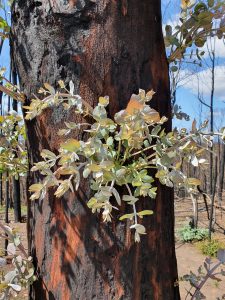 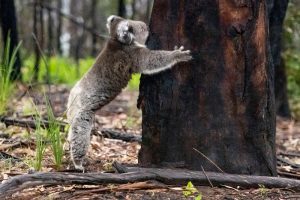 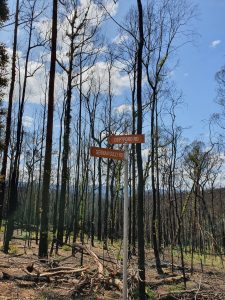 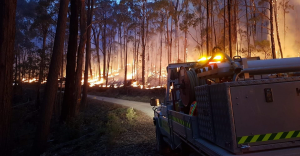