The Red Tuesday bushfires took place on 1 February 1898 in South Gippsland, Victoria, Australia. The bushfires claimed 12 lives, destroyed over 2,000 buildings, and affected about 15,000 people, leaving 2,500 homeless.  A total area of 260,000 hectares (640,000 acres) of bushland and farmland was destroyed by the fires.

The Argus gave some reports of the Red Tuesday fires on pages 5 and 6 of its 2 February edition. At Korumburra people had been fighting fires for 3 or 4 days straight, Neerim South was ablaze,  all remaining buildings from the deserted town of Mirboo were razed, there had been a prolonged struggle with fire at Longwarry South, fires had been remorseless at Poowong East, Leongatha was engulfed by fire and smoke and the Leongatha Labour Colony was destroyed.  The Argus Mon Feb 7 1898 page 6 carried stories of the bushfires in Korumburra, McDonalds Track, Wild Dog Creek, Lang Lang, Warragul, Drouin, Jeetho and Leongatha.  But fires had wreaked devastation across many areas of Gippsland even prior to that terrible day. A report from the Argus on 15 January 1898 describes terrible scenes of the previous week from ‘The Great Gippsland Fires’, It mentions families being left ruined and homeless in Neerim, Noojee, Yarram, Narracan, Thorpdale, North Devon, Warragul, and one man dead at Jeetho.

The Royal Commission on State Forests and Timber Reserves – Fire Protection in Country Districts (Being a report on the measures necessary to prevent the careless use of fire, or the spread of bush or grass fires on public and private lands) was established after the 1898 fires.  It made a number of observations and recommendations to reduce the risk for bushfire – many of which are relevant to this day. 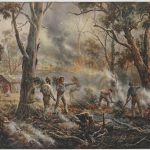