Dozens of communities and important assets (including Melbourne’s water storage) across Gippsland were threatened by fires during the 2018-2019 fire season.

On January 16th lightning ignited the Timbarra fire north of Buchan which grew from 300ha to 10,522ha on 24th January as a result of extreme fire behaviour caused by a massive pyrocumulus cloud that created hundreds of lightning strikes. Read more about it here

A number of fires burnt for weeks in wilderness areas in central, near Ensay and Buchan in East Gippsland and in rugged country around Melbourne’s water catchment, threatening dozens of settlements and burning more than 100,000ha of forested areas. Other significant fires occurred in the Holey Plains State Park near Rosedale, near Grantville in Bass Coast and in an The most significant fires were the Thomson Jordan Divide fire, the Stoney Creek-Walhalla fire, Holey Plains fire south east of Rosedale burnt from 3 January. It was brought under control on January 13th

While the Rosedale fires were burning fires in the high country lasted for weeks and burnt over more than 100,000 hectares of, fires in the Licola and Dargo areas ran for days. The Licola-Mt Margaret Track fire, located east of Licola and west of Valencia Creek, is now contained. The fire burnt around 80,500 hectares. The Thomson fire burnt significant sections of Melbourne’s water catchment to the east of the Baw Baw Plateau and is roughly 6,000 ha in size. The Macalister – Mt Darling – Cynthia Range Tk burnt large sections of the Mt Darling/ Snowy Bluff wilderness area and north to the Tea Tree Range. It is roughly 28,000 ha in size. The Hibernia-Black Snake Creek Track fire, burnt foothill country North West of Dargo towards Crooked River (it is 4,489 hectares in size). The Dargo High Plains fire burnt 14,000 hectares including considerable sections of the upper Dargo River catchment. The Nunnett-Timbarra fire north of Buchan started on 16th January and burnt more than 20,000 ha before being declared contained on 24th February.

By April 9th EMV announced that all the wilderness country fires were considered to be either contained or under control.

The tourist town of Walhalla was very fortunate to only lose one property when a fire that had threatened for days finally hit it on February 3rd. Michael Leeny, proprietor of the Star Hotel, described how wind was coming from all directions and flames were crowning in the trees before rain quelled the fire. https://www.facebook.com/watch/?v=311295249729734&extid=svhZQwt3xDPfIqqe

The situation remained intense for months as lightning and thunderstorm activity continued to light new bushfires across Gippsland with the Bombala Times reporting new ones on March 1st.. 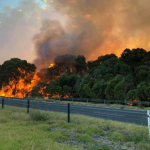