By the start of the 2019-2020 fire season East Gippsland had endured more than three years of drought conditions.

On September 18, 2019 The Age ran a story entitled “Horror fire season ahead with East Gippsland to bear brunt”

They were right. On November 21st fires broke out in East Gippsland following a series of lightning strikes. Many bad days followed and on the morning of December 30th EMV put warnings out about the potential for fires to impact communities.

Fires razed a number of settlements overnight including Clifton Creek, Sarsfield, Buchan. In Mallacoota about 4,000 people (including 3,000 tourists) were trapped as the fire approached the town. More than 1,000 people were evacuated by two naval vessels in the following days.

The Premier, Daniel Andrews, declared a State of Emergency on January 2nd telling people in many communities “If you can leave, you must leave — if you don’t we simply cannot guarantee your safety. Others may be put into harm’s way in trying to protect you and you may well find yourself isolated and cut-off for an extended period of time following fire activity that will almost certainly occur tomorrow [Friday], Saturday and potentially into Sunday.”

Many other communities and settlements were affected over the course of the season including Genoa, Bruthen, Orbost, Club Terrace, Cann River, and Goongerah. Read more about it here.

By then 1,363,100 hectares had been burnt. Four people died as a result of the fires in East Gippsland, hundreds of houses were destroyed,

Barely a month after the fires were contained Covid restrictions were announced in Victoria. This left the recovery much more difficult for fire affected residents. Six months after the fires many victims were still living in sheds, caravans and temporary accommodation.

The following are a number of news articles about the fires. Please be advised that some of them may contain pictures of people who died.

Following the 2019-2020 fires, Dr Tom Fairman posted a series of maps on Twitter that showed the extent of fire coverage in Far East Gippsland since the 1950s.

Roads across East Gippsland suffered extensive damage as a result of the fires. By July works had been completed on more than half of the affected road segments and all roads had reopened, albeit many with restrictions and reduced speed limits. On 12 August 2020 the East Gippsland Shire Council presented a summary of progress towards completion of road repairs that showed how widespread the damage was.

The report of the Inspector General for Emergency Management’s Inquiry into preparedness and response to the 2019-20 Victorian Fire Season was published on Oct 13 2020. The IGEM is also conducting an inquiry into effectiveness of relief and recovery arrangements that is due for completion in June 2021.

In November 2020, the Adelaide Advertiser published a collage of photos of the fires that had devastated so much of Southern and Eastern Australia earlier in the year. Many of those photos are of the East Gippsland Fires with places such as Mallacoota, Buchan, Bruthen, Wairewa and Orbost featured.  The photos are a stark reminder of the horrors faced by people in the early days of a year and that continues to test the resilience of the East Gippsland community. 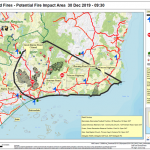