On the 8th January 2003 lighting ignited 87 fires in rugged country in the North-East and East Gippsland Regions. Eight of the fires were unable to be contained and joined together to form the largest fire in Victoria since 1939. The fires burnt more than 1,300,000 hectares over 59 days before finally being declared contained on 7 March 2003.

Thousands of fire fighters from across Victoria were joined by interstate firefighters, the Australian Defence Force and personnel from New Zealand and the United States.

Following the fires, archeological surveys were conducted to find evidence of past occupation by Aboriginal people. The documentary ‘Dancing and the Devil Fire: uncovering the hidden history of the Alps’ illustrates how the archeological work after the fires has lead to a much better understanding of Aboriginal occupation and use of alpine and sub-alpine areas. 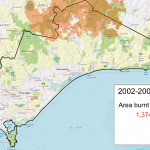